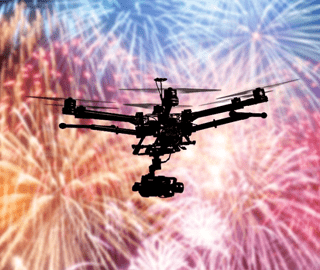 Flying a Drone into Fireworks

Bill asks: I would love to get a different view of the city’s fireworks display. Is it possible to fly my drone directly into it?

Answer: This guy did:

This is new and relatively uncharted territory for hobbyists, event organizers, and the FAA combined. But if you decide to throw caution to the wind (and, possibly, your drone into the garbage), there’s one thing you should absolutely do: Ask questions.

1. FAA regulations are still in play but be sure local regulations are not banning your drone from flying in the area.
2. Make sure it is OK with the pyrotechnician in charge of the display ahead of time.
3. Do you really want to risk your drone and safety of onlookers for the sake of the shot? The closer the drone is to the point at which the fireworks are exploding in the sky, the higher the probability of not getting it back in shape after that flight and it falling out of the sky.

According to FAA regulations, most of the mandates for operating an unmanned aerial vehicle make using one at such an event a challenge, if not entirely impossible: You can’t fly a drone higher than 400 feet, through or above surrounding obstacles, and you have to be able to see it at all times (a difficult feat in a dark night amidst exploding lights). Of course, it’s not always possible to make sure event attendants are adhering to these rules.

There is something of a loophole to local regulations, though. If drones aren’t entirely banned in an area and state or local governments are simply regulating their use, then the location you launch them from is what’s being outlawed—however, if you are outside that designated area and fly your drone toward the fireworks, well then… technically, that’s OK.