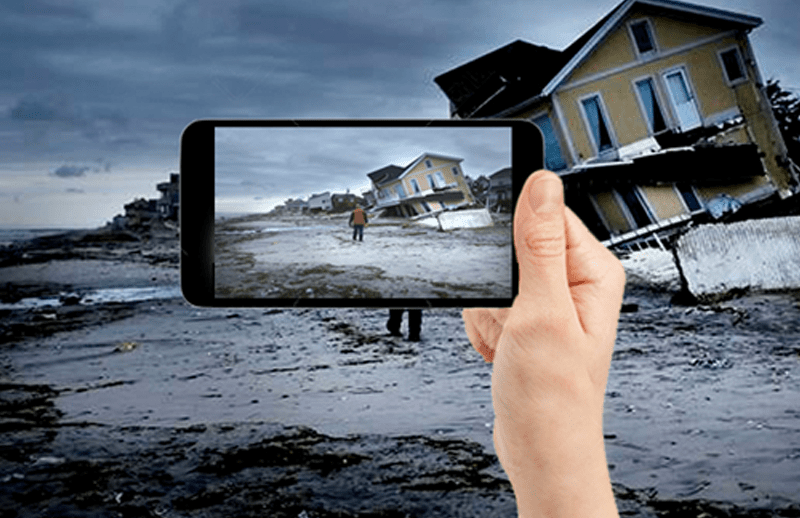 How to Sell Hurricane Video to the News

Ken asks: I’m in the middle of Hurricane Irma and capturing footage with my smartphone. Collapsing houses, water everywhere, trees down. The news could really use some of this unique footage seeing that I am right in the thick of it. The aftermath of all this is going to cost me tons to clean my property and I don’t feel ashamed to ask how to make some extra cash on selling my video. How could I do this? it would be nice to know.

Answer: First off, our immediate thoughts, prayers and condolences for everyone affected by these storms.

It is not a bad thing to put your hand out after shooting such a globally recognized event especially if you’re going to need money to clean up the damage it caused. Being the only one having the broadcast quality money shots – don’t feel bad to exchange them for cash.

To focus on the answer to your question on how to sell news footage, whatever it may be, we found a great post from Bruce Wilkinson at www.engftp.com detailing what he has learned:

Item 1: A large number of network stations also get CNN footage. If you sell your footage to CNN first the other co-ops may not be as inclined to buy it since they will not get as much affiliate demand since their affiliates are already getting it from CNN. (This logic applies to NNS as well I assume)

Item 2: You can sell video on a show by show basis. Good Morning America, Today, and World News or whatever. You do not have to sell footage on a network wide basis. For the really right stuff $5,000.00 per show or network is not a crazy number.

Item 3: When selling to a local maket be REAL clear that they do not own the video you are selling to them. They are only buying the right to air it locally. They can only contribute to their affiliate services what they own and they do not own what you gave them. You sold them only a right to use it on their newscast only.

Item 4: A station can never offer something to an affiliate service that they do not own. ie getting it from another news service. Example. You sell footage to NBC News Channel and an NBC station in Maine uses it because the event happened near their market. That same Maine Station is also a CNN News Source subscriber but they can not then offer that material to CNN. Moral: This policy may allow footage to be sold to four or five co-ops before demand dries up.

Item 5: You should embargo by station call letters not areas. Areas and regions are too vague. ie Is Bakersfield part of the LA market?

Item 6: Local stations will not pay more for exclusive national use versus exclusive local use. Local stations do not get paid for contributions to their respective services. Moral: Use the little guys to tease the big guys. Do try and use them to cash out since they only care about their local competition.

Item 7: Know exactly where your video is going when you sell. CNN USA, Headline News, CNN International, CNN NewsSource? You could say the same with NBC and MSNBC and NBC News Channel. All of them. You can even break it down futher by WEB use, photo, and if you have sound by radio. Some networks have relationships with networks overseas which could be a market to sell to as well. Moral: Know exactly where you video is going to see the light of day before you sell it so you do not unknowingly exclude other potential buyers. (Getting the above in writting from the buyers Rights and Restrictions person is ideal)

Item 8: Reuters use to and still may have rights to everything NBC News Channel has for international rebroadcast. So for example if you sell something to NBC News Channel be sure they are not going to give it to Reuters or you can forget about selling it to NHK Japan, BBC, or anyone in South America. APTN may have a similar deal with ABC ect and never assume what is minor news here is not crazy big news in London, Tokyo, or Rio.

Item 9: For the most part everything above gets honored. When a mistake is made and caught the offender usually pays what the market rate would have been for the footage. Mistakes are also pretty hard to follow for most stringers. Moral: Get DSS with lots local stations though out the country and maybe even a few stations overseas.

Item 10: When you sell something of national interest to a local station it would be good for them to actually contribute that footage, WITH RESTRICTIONS, to their affiliate service versus just sitting on it for their own use. Its free advertising to the bigs and depending on the restrictions you would still need to be called before its used. The peril here is if your local does not include the restriction correctly and they contribute it you have let your video out to the world and you may never get it back again.

Final: Money shots do not happen every day or even every year so its easy not to have to think about all this. When it does happen the people you will be dealing with will have the upper hand because they do this EVERYDAY. As a group we can help prepare ourselves. Its simple, National News has made it clear that they are now “for profit” organizations. Why would anyone blame the content providers for having the same philosophy.