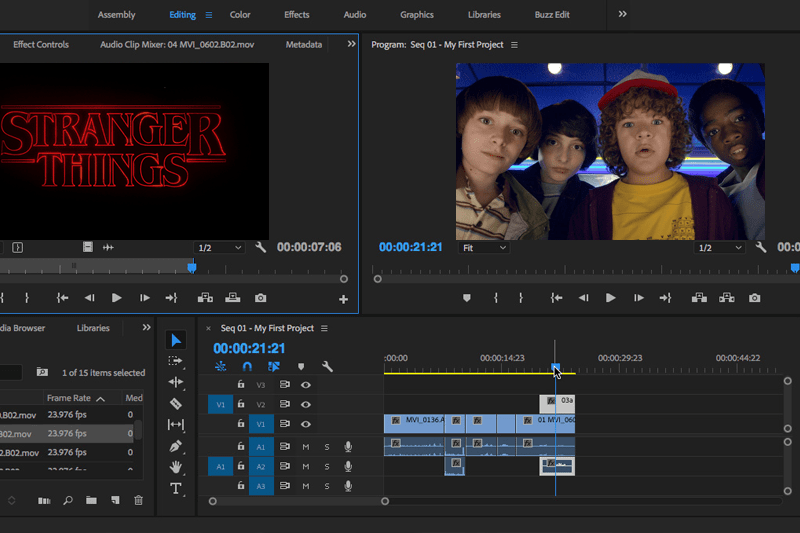 What You Can Learn about Video Editing from ‘Stranger Things’

Abe asks: I’ve been watching season 1 & 2 of ‘Stranger Things’ on Netflix and can’t get enough. I was recently distracted from the story as my novice video editing mind started to notice some of the great editing techniques being done. Can you highlight some of these techniques and tell which ones they are? Inquiring minds want to know!

Answer: We agree, Abe, a great show. Here are some of the edits used — ones that could help you make your work really stand out.

There are a lot of interesting editing techniques used in Stranger Things, all of which make the viewer  feel terrified and tense all the way through. Sure the story is great but the delivery of that story through special effects, sounds, lights and editing add to the atmosphere and make what you are viewing much more dynamic and interesting.

You probably noticed that audio plays a huge role in the transition happening in just about all of these examples and if you really paid attention, you may have caught that in a few of the edits, the audio transition starts to happen just a few frames before the actual video edit begins. This is called an L Cut

So we are almost always “hearing” that transition before we visually process it, and skilled editors mimic that when creating an edit.

A J-cut is the most basic application of this technique.

Used throughout, some match cuts, as well as a couple invisible cuts where the camera pushes into black to finish one scene, the reveals from black to start the next.

Working off of the power of juxtaposition, contrast cuts transition from one extreme to another, hitting the viewer emotionally and physiologically in an unexpected way. And the more popular these types of transitions become, the more edgy they become. Stranger Things utilizes this type of cut mostly during Eleven’s flashbacks.

This transition is simple and straightforward, but can be both stylish and effective. A graphic match occurs when two shots are cut together that contain similar shapes in similar positions within the frame. Stranger Things has used this transition many times in the show, like when Eleven is walking through the store and has a flashback of being brought into the lab, but we’ve seen graphic matches in a myriad of different places.

These 25 creative transitions from Stranger Things will inspire your filmmaking